THE CHICAGO CHAPTER of the Fulbright Association held its Winter Holiday Reception at the Knickerbocker Millennium Hotel downtown Chicago in the early part of December. The festive, holiday setting of the historic Knickerbocker Hotel proved a beautiful backdrop for the annual celebration.

Fulbright scholars attended the 2015 Winter Holidays Reception with their families.

Co-sponsored by the Institute of International Education (IIE), some 122 Fulbright Scholars, alumni, consular representatives, students, and friends of Fulbright attended the event on Friday, December 2, 2015. 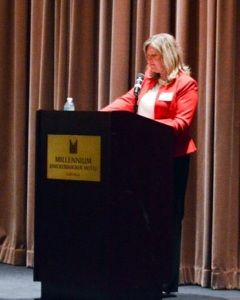 Guests enjoyed a delicious buffet-style meal consisting of salmon, chicken, and vegetarian pasta along with salads and a wonderful chocolate mousse for dessert.

Mary welcomed all attendees and in her speech reminded the audience of the celebratory focus of the event. “One of the main reasons to celebrate is that tonight we have 48 countries represented by scholars, students and members of various Chicago consulates.” she said. In addition, the alumni in attendance have visited 21 countries through the Fulbright Program.

“Another reason to celebrate”, Mary continued, “is that 2016 marks the 70th anniversary of the Fulbright program.” Various activities will be planned through the year around the theme of the anniversary.

“And the biggest reason to celebrate, is our friendship solidified by our experiences as Fulbrighters” Mary Mares-Awe added in conclusion. After Mary’s welcoming speech, the Hon. Consul General of Pakistan to Chicago, Mr. Faisal Niaz Tirmizi, gave a brief speech outlining the importance of educational exchange programs, by recounting his own experiences as a foreign exchange student prior to his diplomatic career. Of the Fulbright scholars and students studying this year in Chicago, Pakistan, represented by six Fulbrighters, comprises the second largest group after Mexico.

A jazz trio of music students from Columbia College Chicago added to the warm, festive atmosphere of the event with their professional-level performance of jazz music through the evening.