38th Fulbright Annual Conference, dares us to to change lives

By Ron Harvey—MORE THAN 300 Fulbrighters from around the world attended the 38th Fulbright Association Conference in Washington DC this past October 16-18. Representing our Chicago Chapter, president Ron Harvey, and Director of Membership Jenni Schneiderman attended the conference.

Although the theme of the Conference was “Dare to Act,” the words that were repeatedly heard in conversations and presentations were, “Fulbright changed my life,” which succinctly express how the majority of the over 325,000 Fulbright alumni to date feel after going through such an experience.

Dr. Hans Blix (Fulbright to USA, 1951), the winner of this year’s Fulbright Prize also said, “Fulbright changed my life.” The Fulbright Prize is awarded every other year since 1993 (the first winner was Nelson Mandela), and “recognizes and rewards outstanding contributions toward bringing peoples, cultures, or nations to greater understanding of others.” Chatting with Dr. Blix for a few minutes was a pleasure. When he learned I  was a member of the Chicago Chapter, he smiled broadly and said: “There are so many Swedes in Chicago!” He was especially pleased that our 2012 Spring Farewell event was held at the Swedish American Museum in Andersonville, and said he hoped to take his grandchildren there someday.

Dr. Harvey and Dr. Mary Ellen Schmider, vice president of the Board of Directors of the Fulbright Association

U.S. Diplomat Thomas R. Pickering gave the Fulbright Prize to Dr. Blix at the fabulous ceremony on the night of Friday Oct. 17 at the Ronald Regan Building in DC. In his speech, Pickering (U.S. Ambassador to the United Nations 1989-1992, among other appointments) offered a bold suggestion: that the Fulbright Awards should become a permanent endowment of public-private sponsorship and thus no longer face the whims of a budget-conscious and/or politically-motivated Congress. Hearing Harriet Mayor-Fulbright, wife of the late J. William Fulbright, was an inspiration as were a number of the young Fulbright recipients onstage for the ceremony.

In his acceptance speech for the Fulbright Prize at the Reagan Center, Dr. Blix used language that is familiar to any Fulbrighter about global perspectives, cultural sensibility, leadership, and the humility of being “teachable” that comes with the Fulbright experience.

In presentations over two days diverse topics and international experiences were shared. For instance, initiatives that put Palestinian and Israeli musicians together to perform concerts together all around the world could ease hostilities were presented. Fellow Chicagoan Dr. Cecilia A. Conrad, Vice President of the MacArthur Fellows Program spoke about like-minded MacArthur Fellows, epidemiologist Dr. Janine Jagger and musician Corey Harris. 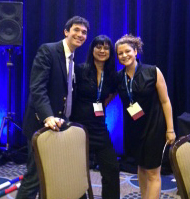 Jenni Schneiderman, Director of Membership of the Fulbright Chicago chapter also presented at the Conference. Schneiderman, a Fulbrighter to Mendoza, Argentina in 2009, presented on her work with Ashoka Start Empathy which teaches empathy skills via a network of Ashoka Fellows and other partners around the world.

The conference offered a feeling that the basic philosophy of Senator Fulbright lives on healthily to this day: putting people from different cultures face-to-face in the same room with a common purpose to conduct research together – or to sing and dance together – can change the world.

Author’s note: Throughout the conference, I met with many Chapter Presidents and officers who face the same challenges as our Chapter: how to support and add value to our current members, how to increase membership, and how to show the value of Institutional membership to Chicago-area universities and colleges. If any of you have ideas on how we can address these challenges, we would love to hear from you (fulbrightchicago@gmail.com).

I am in my final two months as President of our Chapter. The next president will face the same challenges and reap the same rewards as I did. I invite you to consider joining the Board. I invite you to become involved with planning our activities bringing visiting Fulbright Students and Scholars together with you, our Alumni and Friends of Fulbright. I invite you to further the Senator’s namesake and mission right here in the Chicago area.