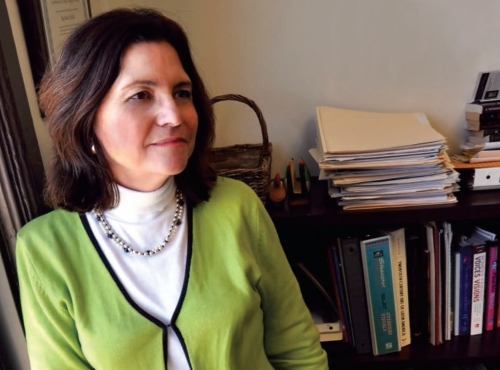 Dr. RoseAnna Mueller in her office at Columbia College Chicago.

FULBRIGHTER TO VENEZUELA in 2002/2003 and Columbia College Chicago Professor Emerita, Dr. RoseAnna Mueller has published the first English translation of one of the main works of 20th-century Venezuelan fiction.

Ana Isabel, A Respectable Girl, was released in June 2016.

Ana Isabel, A Respectable Girl (Universitas Press) was originally released in 1949. Written by Antonia Palacios Ana Isabel, una niña decente (in Spanish) is a classic coming-of-age story set in Caracas in the 1920s, exploring issues of race, class, and gender and exposing the colonial and patriarchal legacy of the country in the era before urban development and the dependence on an oil economy and in the midst of a dictatorship. Antonia Palacios (1904-2001) was one of the most important Venezuelan writers of the 20th century. A poet, novelist, essayist and short-story writer, she was also a prominent feminist and civil rights activist. 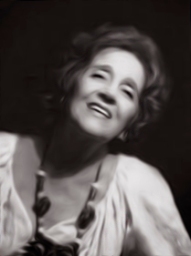 Writer Antonia Palacios, one of the most influential writers of the 20th century in Venezuela.

The novel broke with the symbolic realist genre in vogue in Venezuelan narrative works and inaugurated a new form of feminine expression with poetic overtones. It takes on a confessional and autobiographical tone as it represents a young girl’s reality as she questions what it means to be respectable in her society. In describing his mother’s work, Fernán Frías points to the work’s “innocent sensuality” and concludes that both young readers and adults can enjoy the work.

RoseAnna Mueller says that her “fondest wish is to have non-Spanish speaking readers fall in love with young Ana Isabel and share in her world with all its joys, sorrows and longings.” Mueller considers that if we are truly serious about diversity and multi-culturalism, then we all must read beyond the borders of the established canon.

During her extensive teaching career, Mueller has taught works by Latin American women writers and she feels that if she were to teach Latin American Women’s literature at the Universidad de los Andes, Mérida, she should include the works of Venezuelans. Thanks to the Fulbright, Mueller says that she “was able to learn more about the rich heritage of Venezuelan women writers the world knows little about. Thanks to the on-going connections I continue to enjoy with my colleagues in Venezuela, I was able to enlist their help with close readings of the first drafts of my translation. Their encouragement and their love for their country touched me deeply and makes all the hard work looking for just the right word worthwhile.” She values the collaboration that her Fulbright award was able to allow her to continue her research over the years.

In January 2017, RoseAnna Mueller will be working at the Pontificia Universidad Javeriana and Universidad Nacional in Bogotá, Colombia, thanks to a Fulbright Teaching/Research Award. This will be another opportunity for her to continue her work on Latin American women’s literature through the study of the narratives of three mystic nuns of New Granada.

A native of Italy, Mueller emigrated to the U.S. when she was six years old. She is fluent in Spanish and Italian and an active member of the Chicago Chapter of the Fulbright Association.