35th Fulbright Annual Conference in London was a success, “best in years”

By Elio Leturia — OVER 160 FULBRIGHTERS from around the world gathered in London to participate in the 35th annual conference of the Fulbright Association this past October 18-21, 2012.
This time, the conference was titled “Fulbrighters Minding the Gaps (and Bridging them).” During two intense days, the event was filled with meetings and panels. To see the program of activities click here.
After the Fulbright Association Business Meeting that started the Conference on Friday morning, the plenary “Fulbrighters Minding the Gaps and Building Bridges: Economics and Finance” took place at the Pestana Chelsea Bridge Hotel in the quaint Battersea area in London.

During the Diversity Luncheon at the Pestana Hotel

The conference continued with the diversity luncheon in which Baroness Kishwer Falkner, Liberal Democrat Spokesperson for the Ministry of Justice in the House of Lords, spoke about Global Inclusion in the 21st Century.
Meanwhile, the Chicago Chapter of the Fulbright Association participated in the panel “Fulbrighters Volunteer Giving Back in Local Community / Chapter Activities. In this panel Rosalba Corrado Del Vecchio presented the project “Youth Mentoring Initiative for International Understanding: A Fulbright Chapter Undertaking,” and Elio Leturia, current Chicago Chapter president presented: “Fulbright PARTNERSHIP BOOK: Small Projects, Big Causes” with the video “The Book Partnership Project.” 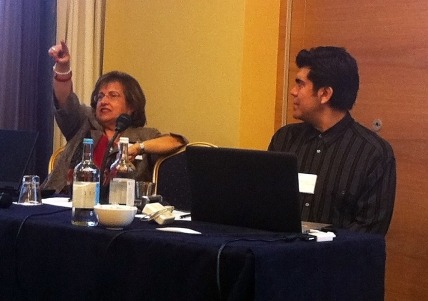 But not everything was meetings and panels. We also had a chance to mingle and get to know each other at the Thursday opening reception at the Pestana Hotel and at the Friday reception at the U.S. Embassy in London. 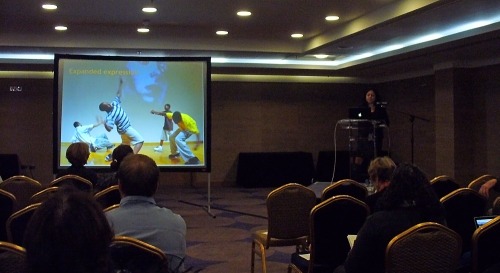 And don’t forget the closing banquet on Saturday which theme “The Four Nations of the British Isles: Celebrating Distinct Heritages and Common Allegiances” allowed us to listen to beautiful British music and enjoy a delicious meal.
The conference ended with a wonderful trip to Oxford on Sunday.

During the Closing Banquet “The Four Nations of the British Isles: Celebrating Distinct Heritages and Common Allegiances”