Sheltering in place increases risk, danger for abuse victims of all ages 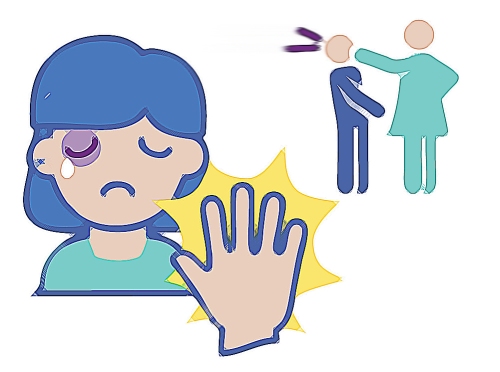 By Teuta Peja—DURING THE COVID-19 pandemic, we are continuously told to self-isolate and stay at home because home is the safest place to be while the virus rages outside. But for victims and survivors of domestic/family violence this may not be the case. Some abusers may take advantage of the coronavirus outbreak to exert further control over the victim. Self- isolation with abusers and social- distancing may increase isolation and family violence of more vulnerable groups.

» Legal Resources for survivors of Domestic Violence during COVID-19 quarantine

Teuta Peja moved to Chicago from her hometown, Pristina, Kosovo in 2015, when she was awarded a Fulbright scholarship to pursue her MA in Women’s Studies and Gender Studies at Loyola University Chicago. Currently, she is continuing her doctorate studies in Criminology at University of Illinois at Chicago. She refers to the Fulbright community as her international family.

Icons made by flaticon.com

By Teuta Peja—SOME 100 GUESTS  gathered on Friday, January 27, 2017 at the elegant auditorium and reception space of the Alliance Française de Chicago, for the  the Chicago Chapter of the Fulbright Association Winter Holiday reception and Dee Sarelas Award ceremony.

Among the attendees were  Fulbright alumni, current visiting Fulbright  scholars, Fulbright students, eight members of the Chapter’s Board of Directors, friends, and family. The event was co-sponsored by the  Institute of International Education (IIE).

Guests enjoyed socializing with each other, exchanging Fulbright experiences and intercultural discussions. The attendees represented some 40 countries from around the world. 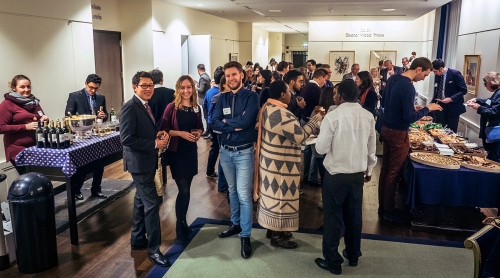 Fulbright alumni and guests enjoyed a pleasant celebration with great food at the Alliance Française in Chicago.

Delicious appetizers, desserts and drinks were shared by all attendees.

A group of visiting Fulbright students commented on the pleasant space and  added that events like this create a wonderful opportunity to mingle, get to know other Fulbrighters and exchange advice about living and studying in Chicago.

The President of the Chicago Chapter of the Fulbright Association, Mary Mares-Awe welcomed guests with a heartwarming speech highlighting the mission of  Fulbright to promote mutual understanding between the people of the United States, and citizens of almost every nation on earth —through cultural, scientific, and educational exchange. She also thanked board members for volunteering their time and being dedicated to the Fulbright mission and its ideals.

The special part of the evening was the announcement of the winner of the prestigious biennial Dee Sarelas Fulbright Service Award. The award is given in recognition to a person who has worked diligently over the years to promote and carry out the Fulbright Mission.  This year’s recipient is Ana Cristina Sisson, a long-time, dedicated Chicago Chapter member.

Ana Cristina Sisson holds a bachelor’s degree as a double major in Spanish and English from Colby College in Maine, and a Master’s degree in Social Sciences from the University of Chicago. She was with Fulbright English Teaching Assistant program in Uruguay in 2006.

Cristina joined the Fulbright Association and the Chicago Chapter in 2008. Since joining the chapter, she has played a vital role in organizing many cultural and educational activities and events for thousands of Fulbrighters. She has also served in the position of Chapter treasurer until 2016.

In addition to her commitment to her young family and to the Fulbright Chapter, Cristina teaches Spanish at Hinsdale District One-Eighty-One. Prior to that, she taught Spanish at the Ogden International School of Chicago, and the Chase Elementary Magnet Cluster School in Chicago.

“In the spirit of service, Cristina has been an integral part of the board, serving in her portion in a totally volunteer status. Those who chose to do so, do it out or their dedication to the Fulbright mission.  Cristina so richly deserves this award…because she’s done a tremendous job and is truly an inspirational person.”       — Mary Mares-Awe, President, Fulbright Chicago

Fulbrighters from all over the world gathered at the Holidays event.

Traditionally, the previous award recipient presents the award to the new Dee Sarelas recipient, but this year it was different. The 2014 Dee Sarelas awardee, Ron Harvey, the Vice President of the Fulbright Chicago Chapter, was not present at the event because he is on a Fulbright research and teaching fellowship to Bulgaria.

The Holiday event and Dee Sarelas Award Ceremony was very-well attended. It has become the main Fulbright Chicago event of the year. 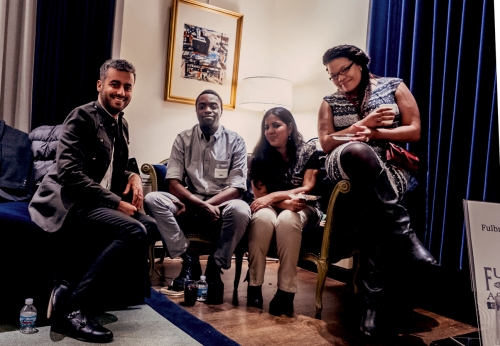 But although Ron could not be present in person, he recorded a short video speech that was played at the ceremony.  In his speech, Ron emphasizing Cristina’s friendliness, her engagement with the Fulbright Chicago Chapter, and her enthusiasm to promoting the values of the intercultural exchange through educational activities.

“Cristina is great at bringing the people together; she would invite visiting Fulbright over for dinners with her family as well as other Fulbrighters and expose our way of doing things with the visiting Fulbrighters. Cristina has the belief that you do not have to be official to have an impact in people. I can’t think of a better person to receive the Dee Sarelas service award”—Ron Harvey, Vice President, Fulbright Chicago

Upon the acceptance of the award, Cristina remembered her Fulbright year in Uruguay working with the public-school teachers and her work with the Chicago Chapter board upon her return to the US.  In her inspirational speech, Cristina spoke of Fulbrighers sharing the will and excitement of working toward making a difference in the community. 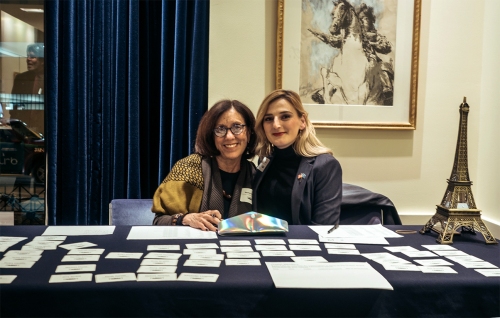 She encouraged people to join the board and participate in Fulbright-focused activities.  She urged everyone to get involved in activities even though they may be out of their scope of work.  She also advised people not to let the fear of not knowing what the job entails, to get in the way of participating… “When there is a need, take a risk.” She said in referencing her own resolve to take up the position of treasurer, when there was a need for someone to step into the role.

Cristina wrapped up her speech by emphasizing the Fulbright mission and legacy.

“I wanted to leave you all with Senator Fulbright’s words, to inspire us to visit local schools, ask a professor to visit their child’s school and talk about the Fulbright program, the mission and your home country or where you traveled.  Don’t let the fear of being overwhelmed get in the way…”

After hearing the speeches, Manithda a visiting Fulbright student from Laos, said “The award ceremony made people get to know and appreciate people behind the scene more. I didn’t know who were the people behind the scene who did the good for people in the front until that award ceremony. This encourages me to want to help and voluntarily work with the Fulbright  organizing group.” 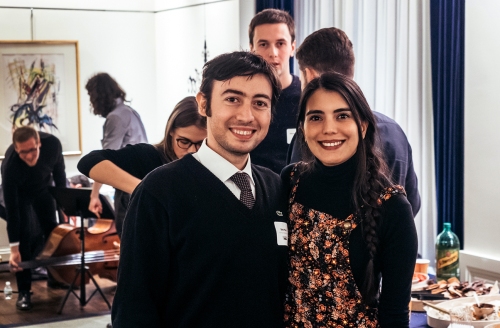 The guests congratulated Cristina on her award and praised the organizers —the members of the board—  for putting up such an amazing event.

Fulbright alumna from Afghanistan comes back to present at Loyola University

By Teuta Peja—AFTER ONLY A FEW months of leaving Chicago “for good,” Fulbright alumna Shughla Hellali from Afghanistan returned to give a presentation at the South Asian Womanhood and Girlhood Conference (SAWG) at Loyola University Chicago (LUC), in October.

In this conference that addressed the topic of identities in transition with the aim to highlight the changing context of women and girls in South Asian society, Shughla discussed the rhetoric of epistemic violence against Afghan women caused by international media coverage and the limited understanding of the cultural and native context.

Shughla came to Chicago on a Fulbright Foreign Student grant in August 2014, to pursue an MA in Women’s and Gender Studies at Loyola University Chicago. After the completion of the program, she returned to Kabul, where she is now working as the Gender Specialist with United Nation Development Program. Recently, she became the Vice President of the Fulbright Association in Afghanistan.

This is her second visit to the US since her returned to Kabul in December 2015.

In February of this year, she traveled to Washington DC to attend several meetings on peace and security in Afghanistan. She and her colleagues at the Afghan Fulbright for Peace organized the meetings with the USIP, US State Department and the Afghanistan’s Embassy.

During her recent visit to Chicago, Shughla was experiencing different emotions because as she says “she was back to her home-away-from-home.”

In addition to presenting her paper at SAWG Conference, in Chicago, Shughla also presented her work on “Ms. Representation: Media Portrayals of Afghan Women and the Epistemic Violence of International Intervention” to Loyola University academic staff and students.

Teuta Peja is a current Fulbright student from Kosovo.