International theater for only $5 for student Fulbrighters! 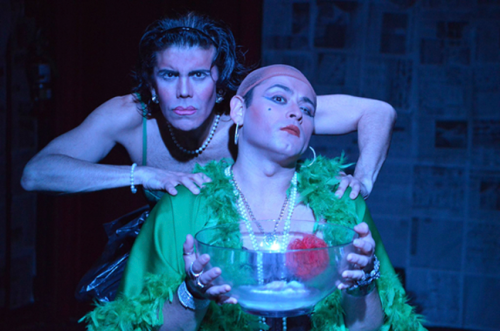 Elio Leturia as Dolores and Oliver Aldape as María in Orchids in the Moonlight by Carlos Fuentes, directed by Sándor Menéndez.

By Elio Leturia— TWO POOR CHICANAS living in Venice, California imagining they are in the Italian Venezia. One thinks she is Dolores del Río; the other, María Félix, the most revered Mexican film stars of all times. Dolores started her career in Hollywood, and María worked Spain and France. Both were top stars during the Mexican Golden Cinema Era.

In this play, they are not women but transvestites who live their lifes through their idols movies.

Adults get $5 off, which means they only pay $20 when using that code.

The play has supertitles in ENGLISH.

Come see the play, support the arts and celebrate the spring! Check out the video: