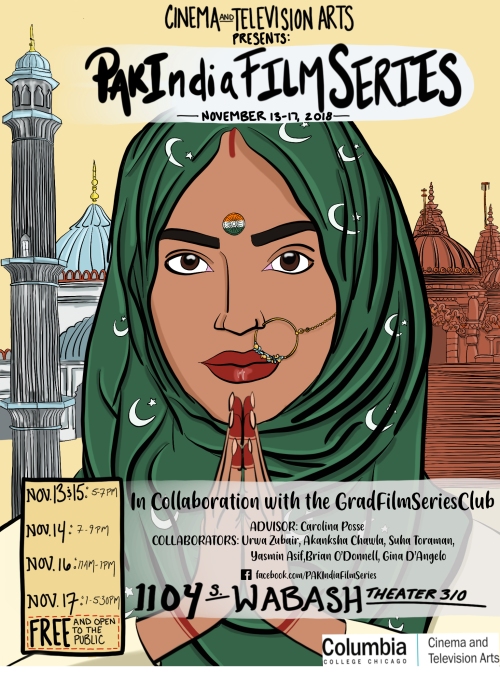 PAKIndia FILM SERIES is a showcase of films that represent stories, themes and talent from Pakistan and India with the goal of promoting the culture and perspective of life from the two countries. The festival aims to explore the unifying traditions and culture separated by a border and to widen the view of the two countries.

In celebration of International Education Week, the Chicago Chapter of the Fulbright Association invites Fulbright alumni, Fulbright scholars and students, your family and friends to attend this festival, organized by the Grad Film Series of the Cinema and Television Arts Department of Columbia College Chicago.

The series presents 11 films that showcase the unifying traditions and culture separated by a border. The festival runs over a period of five days from November 13th, 2018 to November 17th, 2018; featuring an exclusive Documentary Day, and a Short Day.

Dir. Alankrita Shrivastava, 117 minutes, 2016. In order to be independent and break free from the conservative society, four women sets on a journey to discover freedom and happiness.

Dir. Ali Sohail, 4 minutes, 2017. A crew of eight travel more than 6000 km to explore the scenic beauty and raw nature  of the northern tourist and hiking attractions of Pakistan.

Dir. Arsalan Majid, 5 minutes, 2018. The film recounts a story of a female farmer Iqbal Mai, and her journey marked by struggle and resilience.

Dir. Dheeraj Jindal, 15 minutes. 2016. In a small town of Peshawar, Pakistan, Farooq has a simple demand of a new school bag on his seventh birthday. But his mother, in spite of her love and affection seems to be unfazed by her child’s plea. Unknown to Farooq, there is something waiting for him on his birthday.

Dir. Payal Sethi, 27 minutes, 2016. In the Old City of Hyderabad, Raisa hatches a dangerous plan to save her younger sister from becoming a one-day bride when she finds an archaic remedy that could restore a girl’s virginity.

Dir. Belaal Imran, 15 minutes, 2018. A narrative journey of Ghulam Raees who takes us back in time when he used to work at the tea store of Ahmedeen. The film shows a strong bond that tea can create between two individuals.

Dir. Akanksha Chawla, 7 minutes, 2018. Natural Selection follows a young Indian woman who moves to America to follow her dreams of becoming a comedian and has experiences along the way she hasn’t quite bargained for.

Dir. Shonali Bose, 100 minutes, 2016. A rebellious young woman with cerebral palsy leaves her home in India to study in New York, unexpectedly falls in love, and embarks on an exhilarating journey of self-discovery.

Dir. Leslee Udwin, 63 minutes. 2015. India’s Daughter examines the society and values of India after a 23-year-old medical student is raped and murdered on a bus.

Dir. Sharmeen Obaid Chinoy, 40 minutes. 2015. A woman in Pakistan sentenced to death for falling in love becomes a rare survivor of the country’s harsh judicial system.

Dir. Ashutosh Gowariker, 225 minutes, 2001. The people of a small village in Victorian India stake their future on a game of cricket against their ruthless British rulers.