FULBRIGHT CHICAGO WAS present at the 41st Annual Conference of the Fulbright Association that took place in Puebla, Mexico, Nov. 1 – 3, 2018. The yearly meeting coincided with the Day of the Dead, which offered participants a unique cultural experience.

Under the name of “One World, Many Voices,” this was the first conference held internationally since it took place in London in 2012.

In an effort to strengthen ties with the neighboring country and celebrating the great cultural wealth of Mexico and our Fulbright global diversity,  this annual event was sponsored by the Fulbright-García Robles Mexican Fulbright Commission, COMEXUS. The several panels, round tables, presentations, poster sessions and closing plenary took place at the William O. Jenkins Convention Center in the heart of the city.

The opening reception at the Baroque Museum include a visit to the different exhibits.

The conference started with an opening reception at the International Baroque Museum, an extraordinary building designed by the Japanese architect Toyo Ito, the Pritzker Architecture Prize laureate in 2013. There, participants had the opportunity to see an unparalleled collection of baroque art.

The day prior to the opening , two special trainings were held at the Popular Autonomous University of the State of Puebla: a Chapter Management workshop aimed to directors of the 52 U.S. chapters, and a Fulbright Program Advisers Workshop where several Fulbright commission directors from countries such as Canada, Poland, Iceland, Luxembourg, Mexico, among others, offered presentations about their own international award programs. 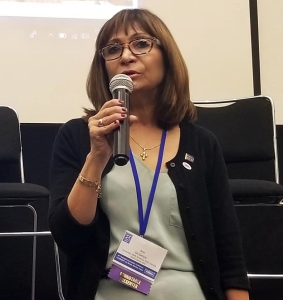 From our Chicago Chapter Dr. Ana Gil-García, Northeastern Illinois University Professor and five-time Fulbright Award recipient, participated as a panelist in the “Diversity & Inclusion: The Social Dimension of Change” program.

Gil-García  also presented in the “Taking Action to Preserve Democracy and Promote Peace” round table.

From Columbia College Chicago, Journalism Associate Professor Elio Leturia was invited to offer a Ted-Ex Fulbright style talk, “Cross Borders and Culture” along with six other presenters from the Netherlands, Norway, Georgia Institute of Technology, Ithaca College and University of Denver, among others.

Dr. Ana Gil-García, Elio Leturia, Dr. Dolores Rinke and Dr. Manfred Phillip, President of the Board of Directors of the Fulbright Association.

Also present from the Chicago Chapter was Dr. Dolores Rinke, Purdue University Emerita Professor and current Treasurer of the Fulbright National Board of Directors.

Fulbrighters having a good time during the closing reception.

The Awards Gala was held at the San Pedro Art Museum in which Rebecca Macieira-Kaufmann was recognized with the 2018 Lifetime Achievement Award for her work fostering positive relations between Mexico and the United States. The closing of the conference was animated by a mariachi band where all the participants shared stories and exchanged experiences in the most important annual meeting of the Association. 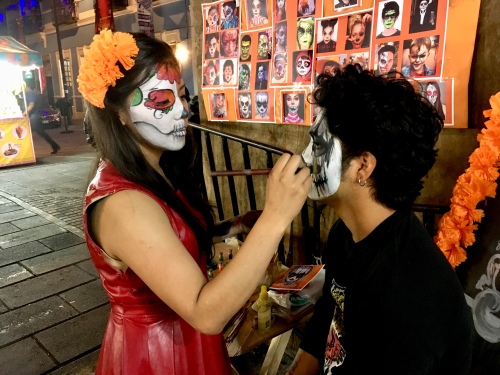 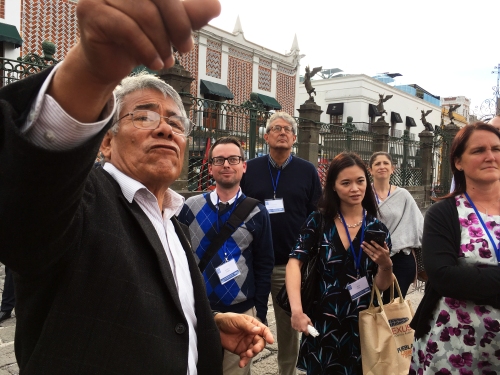 A tour to the Cathedral in the main plaza of Puebla

A tour to the Palafoxiana Library in downtown Puebla 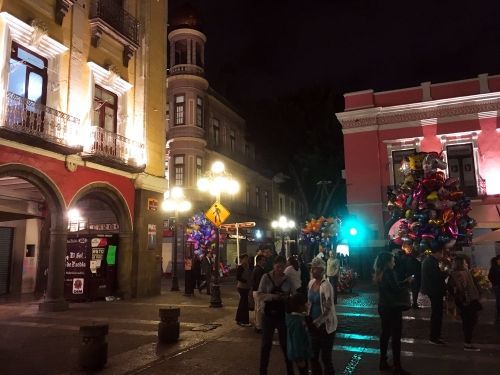 A beautiful night in Puebla during the 2018 Annual Fulbright Conference

The Ballet Folklórico during the opening plenary in Puebla. 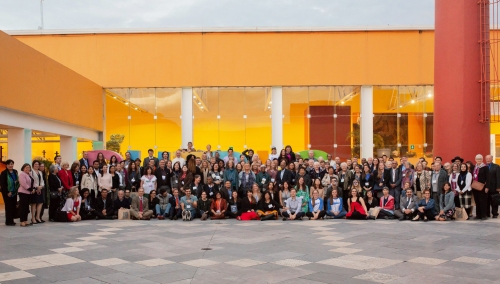 All the participants pose for a photo right before the closing reception.